Sad to say I have only just discovered that Mel Smith has passed away. He died of a heart attack on Friday 19th July.

Although probably best known for his partnering with Griff Rhys Jones, in “Alas Smith And Jones”, he was so much more than just part of a double act. 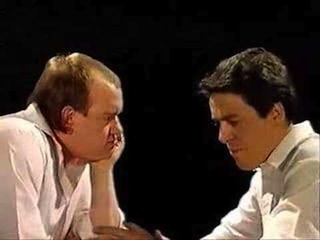 Smith was a founder member of “Not The Nine O’Clock News” along with Griff Rhys Jones, Rowan Atkinson and Pamela Stephenson. Smith and friends became a staple of British television. The humour in the TV shows, a product of the Thatcher era, became unmissable viewing. Comparisons have been made, likening the Smith and Jones partnership to that of a modern-day Abbott and Costello.

Smith, a successful actor appearing on both TV and the big screen, also directed films such as “Bean”, “The Tall Guy”, Radioland Murders and “High Heels and Low Lifes”. He also contributed his writing skills to many TV and live shows.

I have fond memories of those TV shows, especially “Alas Smith & Jones” of which they made 10 series.

Mel, you left us a wonderful legacy and you will be sorely missed.

Heartfelt condolences to your family and friends.

Dr. Jordan, having just been involved in the birth of a baby to an asian lady

“I’m not happy with his colour”

The UKs media are, this morning, falling over themselves to report on, well, nothing really. Who can make the UKs weather the big story of day.

Last night they were warning us about the snow and the big freeze that is going to engulf the country. The ITV News and Weather were advising us that “much of the country” was going to be impacted.

Last night we were being warned that even if we didn’t get any snow we could expect to get the severe icy conditions with temperatures as low as -6 degC dropping to -15 degC by the end of the week.

This morning we have +2 degC and no snow

On the TV we have had reporters dramatically describing to us how Stansted Airport is operating as normal, how the roads are clear and traffic is flowing unimpeded by the weather.

To a degree I can understand why they are doing it. After all the last big freeze caught many of us with our pants down. In some case the authorities let us down but predominantly we let ourselves down.

Britain does have four seasons every year, pretty much without fail. So it follows that we will have Winter at some time. We should not be surprised when the winter brings with it snow and ice.

Only in Britain are such conditions or even the lack of them deemed suitable for such a media frenzy.

Yes, I wanna tell you a story, about a great entertainer who has sadly passed away.

Max Bygraves has sadly passed at the age of 89.

One of Britain’s best all round variety entertainer.  He wrote a string of comic songs and released a number of albums with his Singalongamax series probably being the most well-known. Max appeared in a number of films, notably Charley Moon in 1956, as well as several TV shows. He also  performed on stage with contemporaries Spike Milligan, Benny Hill, Harry Secombe and Frankie Howerd and in  later years he often appeared at the London Palladium.

For me, probably the fondest memory will be Max singing “Out of Town”. I hope that, wherever Max is, he is enjoying the sentiment of that song.

Say what you will,
The countryside is still
The only place where I could settle down
Troubles there are so much rarer
Out of town

Max Bygraves is most definitely “Out Of Town”

At last, the wait is over, Series 7 of Dr Who gets underway this Saturday.

For those of us that remember the very first Doctor -William Hartnell, the shaky sets and watching in black and white from the very beginning of this British saga, the latest incarnation is far removed from its roots. The special effects are up there with the very best and the series can still make the cold crinklies run up and down ones spine.

Watch the trailer for the new series…..

Asylum of the Daleks: Saturday, 7.20pm on BBC One!