After the girls had, two days ago, overdosed on retail therapy, and I had walked my pins to stumps exploring the River Weaver, it was time to absorb some more Cheshire history. And so off we set, into previously uncharted territory. Our destination, Quarry Bank Mill.

Quarry Bank Mill (also known as Styal Mill) in Styal, Cheshire, is apparently, one of the best preserved textile mills of the Industrial Revolution. Built in 1784, it is now a museum of the cotton industry. The mill was established by Samuel Greg and was notable for the innovative approach to labour relations. This was largely as a result of the work of Greg’s wife, Hannah Lightbody.

On entry to the mill you are guided through the wool/cotton making process, entering on the ground floor. The various informational boards lead you, initially, up to the top floor. This is probably a good thing as by the end of the tour, on weary legs, you exit at ground level, not far from the cafe. Thankfully there is a lift to get you to the top. 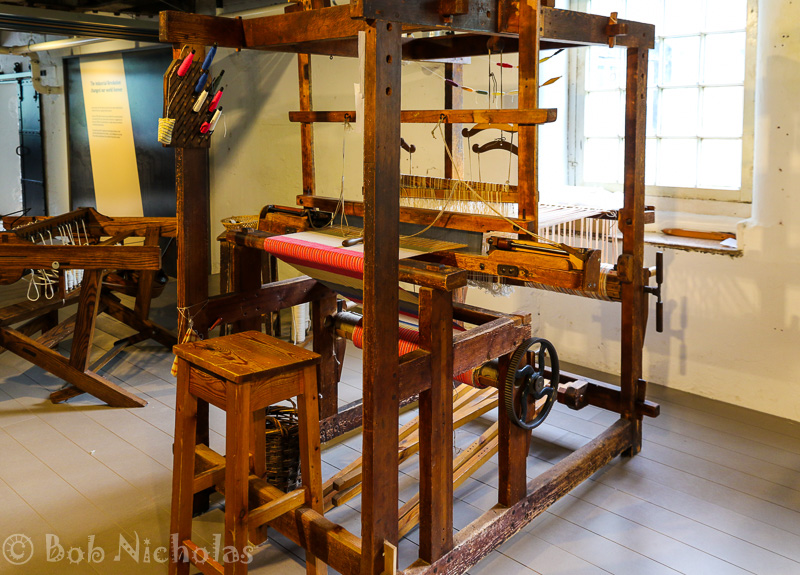 As one explores there are plenty of information boards which enable you to understand the environmental and the social changes that were happening at the time. Lots of examples of the typical “contracts of employment” and apprentice indentures. The mill employed men, women and children. Men, then as now, were typically paid more than women doing the same jobs. Nothing changes.

Perhaps, one of the most significant events of the time was Peterloo …..

The Peterloo Massacre took place at St Peter’s Field, Manchester, England, on 16 August 1819, when cavalry charged into a crowd of 60,000–80,000 who had gathered to demand the reform of parliamentary representation.

The end of the Napoleonic Wars in 1815 had resulted in periods of famine and chronic unemployment, exacerbated by the introduction of the first of the Corn Laws. By the beginning of 1819, the pressure generated by poor economic conditions, coupled with the relative lack of suffrage in Northern England, had enhanced the appeal of political radicalism. In response, the Manchester Patriotic Union, a group agitating for parliamentary reform, organised a demonstration to be addressed by the well-known radical orator Henry Hunt.

Shortly after the meeting began, local magistrates called on the Manchester and Salford Yeomanry to arrest Hunt and several others on the hustings with him. The Yeomanry charged into the crowd, knocking down a woman and killing a child, and finally apprehending Hunt. The 15th Hussars were then summoned by the magistrate, Mr Hulton, to disperse the crowd. They charged with sabres drawn, and in the ensuing confusion, 18 people were killed and 400–700 were injured. The massacre was given the name Peterloo in an ironic comparison to the Battle of Waterloo, which had taken place four years earlier.

Here are some banners produced by local schools to memorialise the massacre. 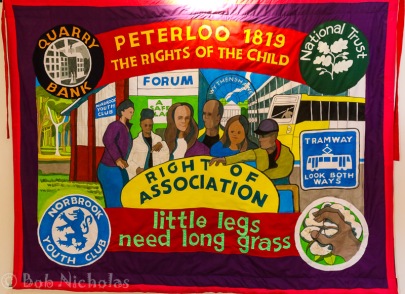 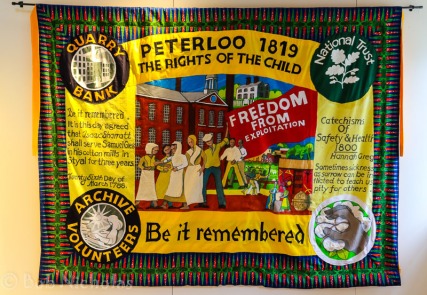 As this is a working mill, many of the machines, that would have been in operation when the mill was in full production, are present today. Some, of them were demonstrated during our visit. There are not as many machines installed now, as there would have been at the height of the mills production. And some of those, that are currently installed, have had some of their working parts removed to reduce the load capacity. 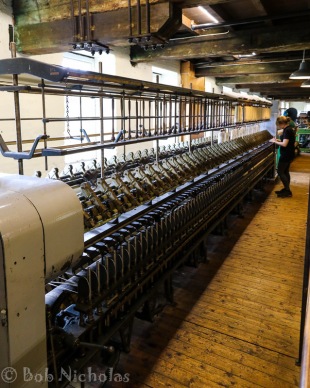 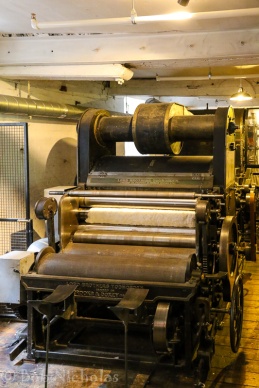 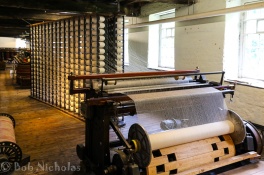 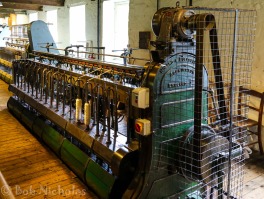 However, even with those parts removed, the noise from these few machines gives one a sense of how noisy the mill would have been when running at full capacity.

Health and safety was not a high priority back in the day. The workers would not have had ear defenders or face masks, such as our guides were wearing. Also, the machines would typically have been unguarded. So, as the workers got tired towards the end of the working day, they became more careless. Loss of fingers and whole limbs was not uncommon.

The mills were hot and humid places to work. Although the mill has many windows the workers would have been punished if they had opened them. The wool/cotton needs to be kept warm, over 20°C, and humid for it to be worked efficiently.

Another issue was the dust/lint which constantly hung on the air. Without face masks the workers would be inhaling the fibres throughout the working day. A common ailment caused by this dust accumulating in the lungs was Byssinosis, for which there was no cure.

Other ailments were common, depending on the victims job in the mill. Mule spinners could suffer from cancer of the groin due to leaning into oily parts of the machines. Weavers tended to develop mouth cancer from kissing the shuttle.

Children were employed in the mill due to their small size. They were employed cleaning the dust from under, and within, the machines, while they were still in operation. Injuries were common and would mean the end of their working life, if not the end of life itself.

With all the dust in the air, and the wooden floors soaked in oil from the machinery, fire was a constant risk. It was usual to have metal plates attached to footwear. So, due to the potential for sparks, the workers tended to go barefoot. Exposing them to splinters from the flooring and then infections.

Originally the mill was powered by a water wheel. The wheel was connected , by belt, to overhead shafts above the mill machinery. These shafts,  then drove the spinning machines, again via belts.

The mill owners introduced steam power in 1810 to supplement the water wheel which could be compromised at times of low water flow. The water wheel was replaced by two water turbines which ran from 1905 to 1959.

When the mill was refurbished,  in 1983, a twenty five foot diameter water wheel, similar to the original was moved from Glasshouses Mill, Pately Bridge, and installed at Quarry Bank. 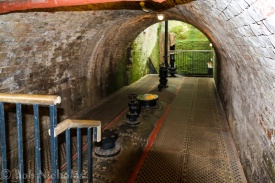 Atop the Boiler – Quarry Bank Mill

Greg and his wife lived very close to the mill. Although the grounds are very pleasant now they were prone to being inundated with smoke from the mill. That is until the chimney was built tall enough to allow the smoke to be dissipated.

Quarry Bank House – Proximity to Mill, viewed from the front of the house. 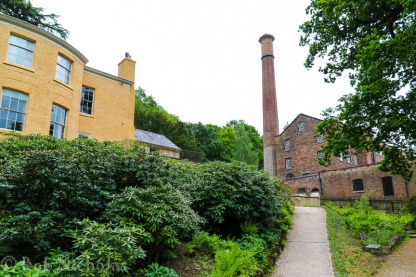 Quarry Bank has a superb network of gardens and walkways which make great use of the local terrain following the River Bollin through the sandstone gorge. The gardens extend up onto terraces and the steep sided slopes. 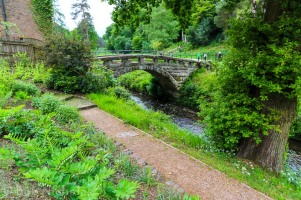 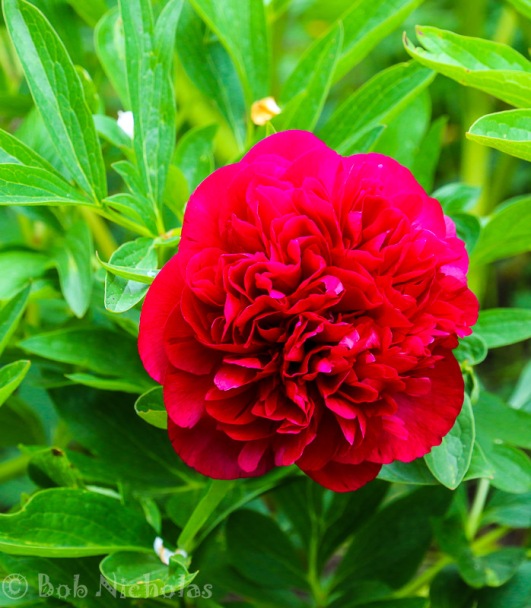 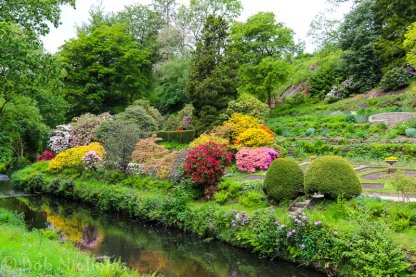 As you would expect, a home such as Quarry Bank House would need a substantial garden to supply the household. Initially the garden was supplying just Quarry Bank House but grew to such an extent it was also supplying Northcliffe Hall, home of Robert Greg.

The gardens were renowned for supplying everything from potatoes and onions through fruits such as melons and pineapples. 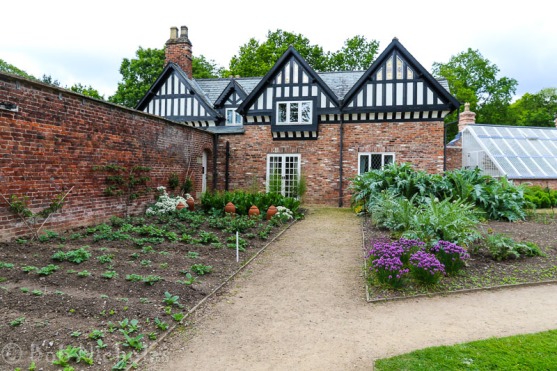 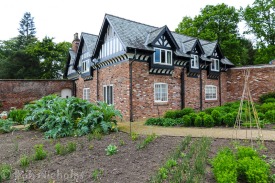 Many mills had accomodation for apprentices and Quarry Bank was no exception. At Quarry Bank two-thirds of the apprentices were girls. Girls, it seems, were considered to be easier to manage than boys.

The Gregs employed adult superintendents to look after the children and even brought in the family doctor, to inspect and treat the children. 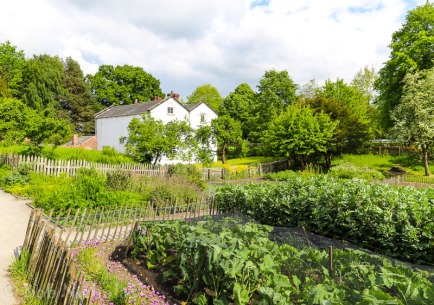 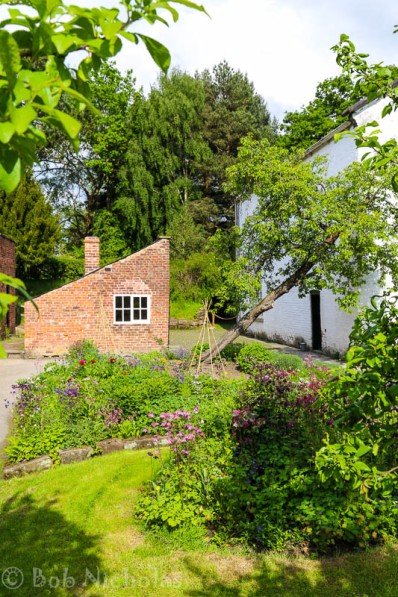 One of the benefits of being an apprentice was the availability of fresh fruit and vegetables from the garden.

Of course the benefits to the Gregs, as with any other mill owners, was that children were ideal workers.  Being small they could clean around the machines. They were also economical. For the cost of food, clothing and lodging, the mill had a steady supply of cheap labour. At its height this was home to some 90 children.

Our visit here was very enjoyable and, of course, educational. We got plenty of exercise walking the grounds. I would recommend Quarry Bank to everyone.