Not much sleep Monday night. Tried to get some shuteye but failed and eventually, 02:00 Tuesday morning, it was time to load the car and head off to the airport. The journey was uneventful apart from the small issue of the entry to the M23 from the M25 being closed.

Seems every time I go to the airport, these days, some part of the roads system is totally closed. Be it the A3, North or South bound, doesn’t seem to matter. Or the M25, so many opportunities to cause chaos. Anyhow, we managed to navigate around the road closure and were soon at the airport. At 04:00, it was a tad cool, actually just 3 degC and as usual there is a guy wandering around in shorts and t-shirt. I guess he was an optimist.

Our next hurdle was check-in / baggage drop-off. Having nailed the online check-in Easyjet are now trialling passenger self-service baggage drop-off terminals. Basically they have done away with a friendly person and replaced them with a computerised set of scales.

This was a painful, financially, experience. It turns out that our holiday deal, via Secret Escapes, only included 15kg of hold luggage. I missed that little nugget in the Secret Escapes paperwork. I already knew we were one or two kilos over our allowance after doing due diligence and checking Easyjets allowances on-line. 23kg it says.  We had 24kg. Our new friendly (sic) computerised scales cheerfully informed us that we were 9kg over our limit and that we would need to pay a charge of £10 / kg. 90  jaw dropping quid. “Is that the total for the return journey ?” I enquired of a real human. “No, just the one way” she replied. She was a bit more helpful and suggested that once we were in Italy we go on-line and amend our booking, pay for extra baggage or another hold bag. That way we would pay a significantly lower fee.

Suitably chastened, educated, and therefore wiser, we coughed up and proceeded through security to go and find a cup of tea while we awaited our departure gates announcement. When said gate was announced we made our way to the waiting area. There we discovered that we had to take a bus ride to the plane. I haven’t had to do that since the seventies. The ride took so long we are pretty sure that, although we were booked into the Gatwick North Terminal, we actually departed from the South. Either that or, as one wag quipped, we had travelled half way to Naples by road.

Another niggle with the boarding process was that we had paid for extra leg room and priority boarding and should have boarded first. Instead it was more like the January sales. Two coach loads of passengers arriving at the plane together and boarding from both ends at the same time. It was never going to end well. I know, we all have allocated seats but it is the principle and of course, the money.

The  plane took off pretty much on time, we had a smooth flight and arrived at Naples airport around 09:40. Even at that time of the morning Naples was significantly warmer than the UK.

Our next challenge was to find the car rental office. There is a courtesy shuttle bus, apparently driven by the grumpiest, near mute, guy imaginable. He efficiently navigated the 5 minute drive to the rental offfice. Still no happier, he started to unload the luggage, then just wandered off leaving the rest for his clients to sort out for themselves.

The car rental experience was much more pleasant. An upgrade from a Renault Twingo, to a Citroen C3 with more luggage space and most importantly, for me, more head room. Also, surprisingly, we only had to pay around 20% of the deposit we had been told was due. i.e. 300 euros as opposed to 1500 euros. The lady at the rental desk was very helpful, providing us with clear directions to escape the chaos around the airport, and get us on our way to the hotel.

The journey to the hotel was not as slick as it should have been. It started well, using my phone as the satnav. However we entered a tunnel, after about 15 minutes driving, and the GPS lost it’s bearings and couldn’t  reconnect. It took us a while to find a safe place to pull over and restart the navigation exercise. We were then taken round in a huge circle. Having been through each of two tunnels twice in each direction, we weren’t sure the app and GPS actually knew where we were. So, another stop and restart seemed to sort things out and we eventually arrived at the hotel. 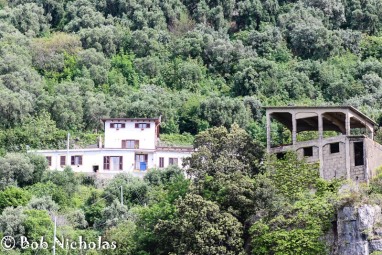 Old Building on the Mountainside Behind the Hotel

Old Building on the Mountainside Behind the Hotel

The Towers hotel is in a superb location and we are really pleased with the room, which has fab views, across the Bay of Naples. Mount Vesuvius is visible directly through our window. We both enjoyed lunch sitting on the terrace with Vesuvius as a back drop ….. 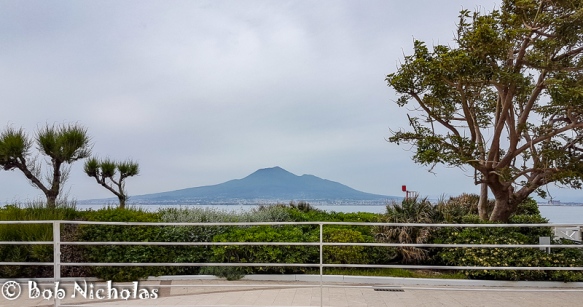 Vesuvius – Viewed over Cheeseburger and Fries 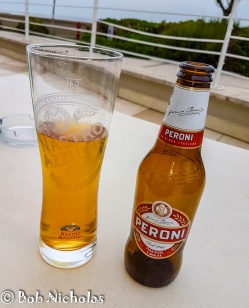 ….. and after a brief walk along the shore line we returned to our room and crashed.

But not before I had taken a few snaps of the surrounding area …….

Annoyingly, the cold that I had just over a week ago, has decided to put in an encore appearance. So due to that, and the rather large cheeseburger and fries for lunch, we decided to bypass dinner and headed for beddy-byes.

2 thoughts on “Italian Adventure Part 1 – Home to the Hotel”