In my previous post I had mentioned  that we booked to go on a glass bottomed boat tour. Consequently we found ourselves up at the unearthly hour of 06:30, packing our bags into the car, so that we could both check-out from Ningaloo Lodge and be ready for our 07:30 pick up.

We were picked up ,on time, by Alek in his bus. He gave a running commentary on what were to see and what our itinerary was going to be. On the way down to the boat he took us down to see the SS Mildura and on the way back we popped up to Vlaming Head Lighthouse. As I have already covered both in my previous post I won’t bore you again.

By the time we arrived at the Tantabiddi boat ramp there were twenty-three passengers.

Alek, left us on shore while he clambered into a canoe and paddled out to his boat which was anchored offshore.

Soon he was motoring back into the jetty ….

After a short informational pitch we were all aboard and heading out to the reef. As you can see from the photos, the sun was hiding and the reef was not well illuminated. The following shots have all had to be adjusted to try to remove the reflections so are not truly representative of what we actually saw. Hopefully they will give you a hint…. 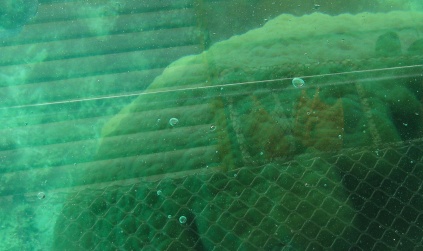 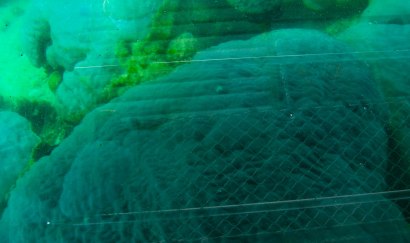 After a tour over the reef Alek tied up to a mooring to allow some of the passengers to go snorkeling. The wind was rising and this session was curtailed. Although the boat was very stable, turning from the mooring brought us across the wind and tide which made an uncomfortable ride, for a short period of time.

On the run back to the Tantabiddi boat ramp we were joined by a couple of dolphins who played across our bows and in the wake.

After returning to Exmouth we headed to See Salt for brunch before setting off back down to Carnarvon.