As I posted on Friday, we were heading up to Wooroloo on Saturday for a tribute act extravaganza. We trundled up to El Caballo Resort suitably equipped with concert seats and bug spray, this being an outside event.

Arriving about 15:30 we picked up our tickets and were duly supplied with coloured bands to identify us as fully paid up for both the show and a buffet meal.

The venue is ideally suited for this type of event with a grass amphitheatre and a covered stage built at the central focal point. Not long after we had arrived, and set up our seats, the show got off to a fairly prompt start.

After an introduction by the MC we were treated to a rendition of Imagine by “John Lennon” as a mark of respect to those who had suffered losses due to the recent atrocities.

NOTE: Apologies for the photos. I didn’t have my camera and my phone is not very good over distance or in the dark. I include them only to give an idea of the venue and break up the sea of text.

And so the show got underway ….

First up was the Roy Orbison Show. This band were really quite good and soon had the audience singing along with them. The “Big O” vocalist gave a pretty good impression. I had seen Roy Orbison, many years ago, in Portsmouth and still remember his fairly stiff performance. Stepping up to the mic to sing, then stepping back prior to the next number. Obviously this show was more a tribute to an earlier, younger man. All in all though, an enjoyable performance.

Next up was the Johnny Cash & June Carter Show and this was where the standards slipped. There were issues with the radio mics throughout the performance which didn’t help but that wasn’t the real problem. The act opened with a solo “Johnny Cash” strolling down among the audience. We lost track of him for most of his performance as he was on in his knees “interacting” with the female audience members. I have seen many TV and video performances of Johnny Cash and don’t remember any where he wandered amongst the audience acting like he was gods gift to women. Throughout the performance his favourite phrase was “you’re on fire” but sadly he didn’t actually do much singing. Given the “Man in Blacks” vast catalogue of songs it’s a shame this guy didn’t concentrate more on the singing as his voice was quite good. At some point he introduced “June Carter”, his “lovely wife”. Apparently she was the writer of many of his “favourite” songs. We were treated to a couple of songs regularly peppered with entreaties to “put your hands in the air” and more “your on fire”. Even with his “beautiful wife” out there he was still off playing to individuals in the audience. A perfectly good stage was totally unused and for most of the act we couldn’t actually see where he was. For me, a long time fan of Cash and his songs, the  inclusion of this act was pretty much a waste of time. Not much of a show unless you were sat six feet away from him.

After a short break it was time for the  The Beatles Show. Thankfully these guys repaired the damage done by the previous act. The sound quality was good, the playing and singing were good too. So much so that we were able to forgive the overly heavy “puddlian” accent. 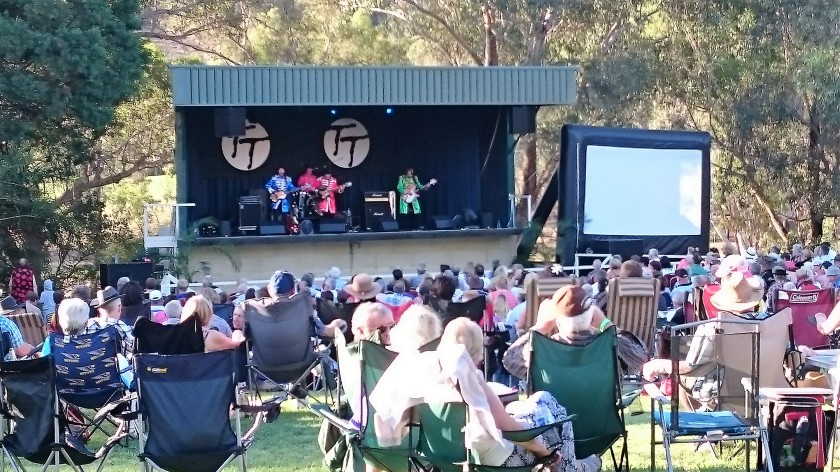 Opening their set dressed for and playing songs from the Sgt. Peppers era they soon had the audience singing along. After a couple of songs they stripped off the colourful coats and reverted to the earlier Beatles style dressed in black shirts and trousers. They delivered a slick performance of the early hits interspersed with anecdotes to identify where the songs belonged in the Beatles historical timeline.

With the conclusion of a very good set we took ourselves of to explore the delights of the buffet meal. Much to our surprise this turned out to be a full-blown sit down meal. We had been expecting to collect our food and go back outside to our concert chairs to eat. El Caballo had put on quite a good spread with choices of chick pea or green salad, a very yummy red cabbage coleslaw, mushroom risotto, sliced pork, beef stew, a fish dish and roast vegetables. There were also choices of sweet which included two different  flavoured mousses and a fruit salad. This was only let down, a little, by the lack of organisation with regard to tables and seating. Most folks appeared to be coming in to the dining room in groups of two, four and occasionally six. But the tables were laid out for eight which meant by the time we entered all of the spare seats were scattered around the room. We were lucky to find a table that had four seats available together, but others behind us were not so lucky.

Unfortunately, or maybe fortunately, we missed the Marylyn Monroe performance while we were eating.  I’m not sure what kind of performance this would have been. Personally I can only name two songs she’s associated with, Diamonds Are A  Girls Best Friend and Happy Birthday Mr President. We will never know if we should be disappointed.

Next up for us was the Creedence Clearwater Revival Show and once again we were treated to a very good performance. These guys turned out to be, for us, the act of the night. 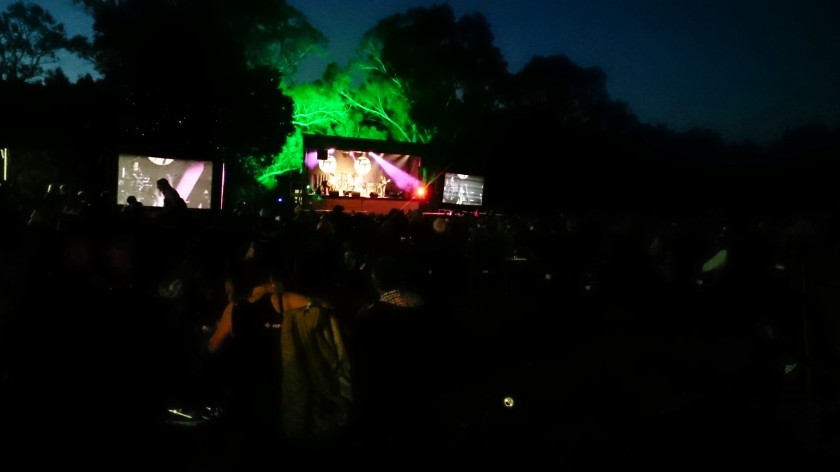 During a set that lasted for about an hour, they played all of the major Creedence hits, finishing up with Proud Mary which, by the way, is the name of the band. Once again the audience was well into the music as well as many folks making use of the dance floor. They are very competent musicians / singers and, if you ever have an opportunity to see them, you will not be disappointed. Given the issues surrounding the real Creedence band members it is unlikely that any of us will see them live on stage anytime soon. Proud Mary make for a great substitute.

A surprise set was Aurora Mackrill who just appeared on stage, with no introduction, in a long shimmering silver dress.

Her set was very short, comprising just three Shirley Bassey songs.  Looking at her website it would seem that she probably did the Marylyn Monroe stint that we missed earlier. We all thought she was very good and would have been happy for her to continue.

Next on the menu was the Elvis Presley Show. “The King” bounded onto the stage dressed in white suit and cape. We soon recognised that this was in fact our “Johnny Cash” performer from earlier. So “The Man in Black” had transformed into “The Man in White” and although the songs had changed the act had not. He couldn’t resist coming down off stage and mixing with the crowd. Once again we were “on fire” and he reverted to the one on one performance that had plagued his “Johnny Cash” act. The gremlins that plagued his earlier show also returned and without warning his music stopped and the sound engineers put on a recording. In response to the opening bars “Elvis”, not knowing that his act had been curtailed, said “What’s this one then ?” The evening continued with recorded music for a short while and then “The King” was back to fairly audible groans from some of the audience. Thankfully, our suffering wasn’t prolonged. His performances as Cash and Presley may have been tolerable had he actually spent more time singing to the whole audience. In my opinion he was a waste of space. More time could have been given over to the other acts. Also, bizarrely, some women were either passing their underwear or telephone numbers to him. Did they not know that he wasn’t the real thing?

Last up for the evening was the Tina Turner Show featuring Rebecca O ‘Connor. This act got off to a promising start with a huge intro. The dancers came onto the stage followed by Ms O’Connor who struck a pose, arms outstretched, as in Tah Dah, here I am. Unfortunately, she was in darkness and we couldn’t see her. The lighting at the front of the stage left much to be desired. In addition the camera which was feeding the two inflatable screens either side of the stage was almost permanently set to provide an image about the same size as the stage appeared with normal eyesight.

So, no close up of “Tina”. The sound quality of the vocals was not very good and after the first number Ms O’Connor was berating her sound crew to make adjustments to add some warmth. Her vocals needed something. Tina Turners voice switches between rough like bootleg whisky thru to smooth like blended bourbon and honey. Ms O’Connors voice was permanently switched to bootleg and began to grate. Like listening to a bandsaw. Maybe she shouldn’t try to do too many consecutive performances, having appeared in Perth the night before. Apparently, the band was lacking decent sound levels via their monitors a point which Ms O’Connor made to the sound crew while moving mic stands around on stage. I understand that the point of a tribute act is to provide the audience with the look and sound of the original artist, but I felt that Rebecca O’Connor with her exaggerated posturing and gestures had created a caricature of Tina Turner. And, with the unpleasant roughness of her vocals we decided to call it a night. We weren’t the only ones and having packed up our things we joined a line of other folks heading for the exits.

Overall we had a  great day and, perhaps, on another occasion we would have enjoyed “The Big O”, “The King” and “Tina”.

The show was, despite my reservations and criticisms, well worth the money.