Well it’s been a while since I posted one of these.

I’ve been up and down healthwise, flu or something similar, and the weather has been dire to say the least. Now we have had a few sunny days and all the plants seem to be exploding into growth and the colours  are fabulous.

Our remaining cherry blossom is looking beautiful and the lawn in our back garden is totally out of control. I’ve taken a few minutes out from work to make a quick perimeter patrol and fire off a few snaps.

Up above is a shot of a butterfly. I don’t believe I have seen one of these before, certainly never in my garden.

Does anyone out there know what it is ?

Here are a few more pictures, some with titles where I know what they are. Some remain anonymous. However, I hope you enjoy these facsimiles as much as I am enjoying the real thing.

My perimeter walk has also highlighted the amount of work that needs to be done around the “estate”.

This weekend has been earmarked for  “slash and burn”. Perhaps not much of the burning but certainly there will be much slashing.

We have also decided to replace the fence which marks the back border for our property. 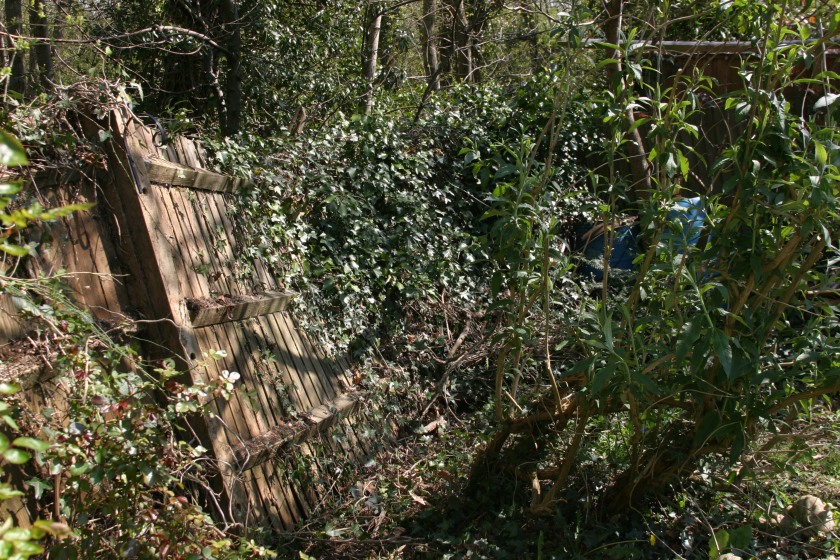 As you can see the fence has a somewhat laidback attitude. Something it took on early the year after the “Great Storm” of 1987. Slowly but surely the post has rotated in the ground and many of the other posts have rotted out so the whole fence has to go. Thats not bad considering it has had no treatment during the last 30 years. So, 25-30 meters of wooden fencing, a task which is a little to big for my DIY skills, will be replaced by a local firm. They have done work on two of my neighbours properties so I have been able to see the quality of their work.

Once that is done we will have a blank canvas against which to plan the transformation.

Here are couple of general shots showing the desperate state of my garden.

It would seem that something has taken up residence under our shed. A large hole and signs of escavation. Maybe that tatty fox, I spotted a couple of weeks ago, has decided to move in.

And finally I submit this image. It is pretty much indicative of the general state of my garden which is in dire need of a make over.