I have recently been sorting through some old photos and, as a result, reliving some past vacations. I thought I should share with you, an insight into our visit to the island of Crete and, in particular, the Samaria Gorge.

So, a few years ago, my wife Gerry was made redundant. We decided to splurge her redundancy money on a holiday and settled on a trip to Crete. Our chosen resort was Malia. It seems Malia has (had?) a bit of a reputation. To be fair, our travel rep did warn us that Malia could be noisy. She also said that due to us going outside of the full holiday season it shouldn’t be too bad.

Indeed, the year after our visit, there was a television documentary about the place. Thankfully our planned trip was just out of season, so we missed the drunken teenage bodies in the gutters and flower beds.

In fact the town was relatively quiet. It is not really our kind of place, what with the main street containing mainly bars and clubs. The restaurants offering “traditional English breakfast”, “traditional Sunday Roast”, well, you get the picture. Finding traditional local cuisine isn’t that difficult if you want to avoid the “Brits Abroad” fare.

Probably the place that left the lasting impression on us was the Samaria Gorge. Not necessarily for the right reasons.

The Samariá Gorge (Greek: Φαράγγι Σαμαριάς or just Φάραγγας) is a National Park of Greece since 1962 on the island of Crete – a major tourist attraction of the island – and a World’s Biosphere Reserve.

The gorge is in southwest Crete in the regional unit of Chania. It was created by a small river running between the White Mountains (Lefká Óri) and Mt. Volakias. There are a number of other gorges in the White Mountains. While some say that the gorge is 18 km long, this distance refers to the distance between the settlement of Omalos on the northern side of the plateau and the village of Agia Roumeli. In fact, the gorge is 16 km long, starting at an altitude of 1,250 m at the northern entrance, and ending at the shores of the Libyan Sea in Agia Roumeli. The walk through Samaria National Park is 13 km long, but one has to walk another three kilometers to Agia Roumeli from the park exit, making the hike 16 km long. The most famous part of the gorge is the stretch known as the Gates (or, albeit incorrectly, as “Iron Gates”), where the sides of the gorge close in to a width of only four meters and soar up to a height of almost 300 meters (980 feet).

So, we paid our dues and signed up for the trip…

Based, as we were, at Malia our journey started at around 05:00 in the morning. Bleary eyed, in the darkness, we clambered aboard the coach. Part way along our route we stopped to grab breakfast at a roadside cafe. As dawn was breaking, the bus appeared to be starting to list to one side and it wasn’t long before we pulled into a lay-by. The driver crawled under the coach and back out again with much scratching of his head. It soon became apparent that our coach wasn’t going any further. Well, not soon anyway.

After a period of time we were informed that we were to join other coaches that were en route to the Samaria Gorge. What we weren’t informed was that we would be standing, or “strap-hanging” as our designated coaches wound their way up the mountain sides. Gerry and I found ourselves on a coach full of German tourists. They were friendly enough but due to language difficulties the conversation was understandably stilted.

Part way up to the Omalos Plateau, we were ejected from our coaches, at the village of Fournes.

Here we sat, opposite a large Greek-Orthodox church.

We were informed that the coach company had been in touch by radio, that a new coach was on its way and would be picking us up, to continue our journey to the top of the gorge.

I think in all we were waiting at the roadside for between forty-five minutes and an hour. The clocks on the church show different times. On the left it says about 09:25 (or 21:25) while the one on the right shows 05:40 (or 17:40). What I do recall is that a coach did arrive and it carried us up to the top of the gorge. We arrived at around 11:00.

The time is important. At the time we hadn’t appreciated the significance. Remember, we set out from Malia around 05:00 and had only had a roadside snack.

What you don’t know is that this trip was sold to us as a gentle days walk. Descend into the gorge. Walk down through the gorge. Arrive at the lower end where we could go for a swim, laze on the beach and have a relaxing meal in a tavern. All this before enjoying the ferry ride along the coast to Chora Sfakion, where we would board our coach for the return journey back to Malia.

The walk takes between five and eight hours dependent on your pace and ability.

And so, like lambs to the slaughter, we headed over the brink to begin the grand descent. At the start there were quite a few steps cut into the cliff face and it was quite steep. On either sides, above and below, there are cyprus and pine trees.

Once down at the foot of the gorge the ground varies from smooth footpaths to boulder strewn dry river beds. 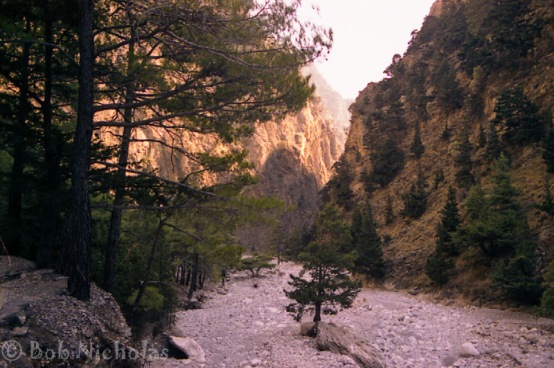 Samaria Gorge, Crete – One of the flatter points. 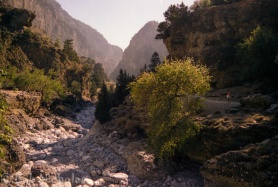 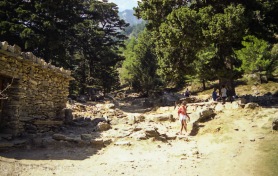 Samaria Gorge, Crete – Gerry making it look all too easy.

At about the half-way point we stopped for our lunch in the village of Samaria. Here we were also able top up our bottle with water from the spring. Lunch, by the way, was a couple of cheese rolls that we had made for ourselves back at the hotel. Not sure of the time but it would have been way past midday.

From here on down the ground got a bit tougher. Gerry was wearing espadrills and I was wearing deck shoes. No ankle support and no real shock absorption or padding for the soles of the feet. We carried on towards the exit, not really knowing how far we had to go, or even how long.  We were being lured ever onward by the thought of the relaxing meal and cold drinks. 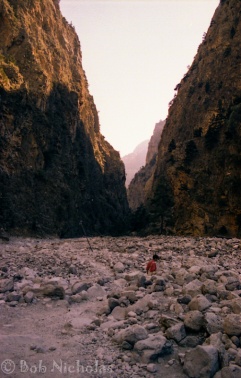 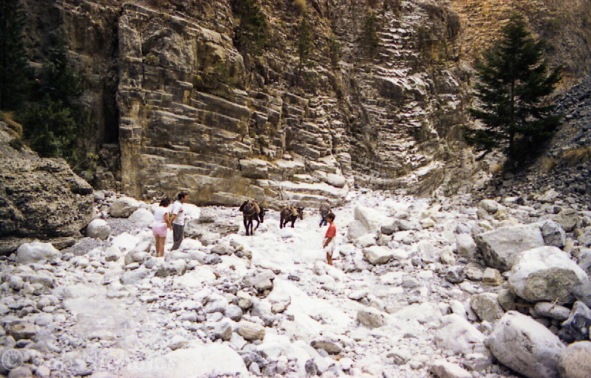 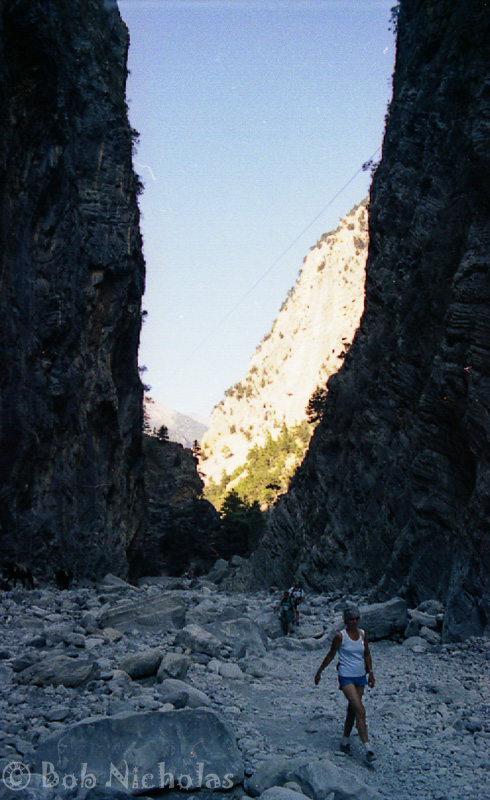 Our feet and our legs were complaining as we, at last, reached the point convergence of the gorge walls. This place is sometimes referred to as the “Iron Gates” as the walls close to within four meters and climb to a height of almost 300 meters (980 feet). We began to think that we were approaching the end of our torturous trail.

The rough ground gave way to a tarmac path and we exited thru the man-made gates demarcating the boundary of the park. What we didn’t realise was that there was still a further thirty minutes or so of walking before we had arrived.

However, there was no time for swimming, relaxing or eating. There was a loud blast of a ships horn, indicating that the ferry was already heading into shore. We just had time to buy our tickets and to grab a beer before climbing aboard the ferry.

You can see in the following picture that Gerry did not even have time to cool her feet off in the sea. Her legs still have the white dust from our trek.

It should be noted that the ferry is not designed for passengers. It is very similar to those used to ferry vehicles between Portsmouth and the Isle of Wight. Basically a roll on, roll off ferry,  with ramps at each end. No comfy seats.

By the time we arrived at Chora Sfakion and found our coach the light was beginning to fade. We joined a long convoy of coaches snaking their way up the mountainside. Riding our coach, experiencing endless hairpin bends in the dark, was not a very relaxing journey. The further on into the mountains we travelled, the more I became aware that our coach was not one hundred percent. Eventually, as we ground our way out of a small village, the beast came to a complete standstill. Imagine the sinking feeling knowing your coach has just broken down, especially when your coach at the beginning of the day had also broken down.

In this instance the driver not only clambered underneath but also took up the floor boards inside the coach. With much banging and muttering all was declared well. Floor boards replaced and the coach was back underway.

We did, eventually, arrive back in Malia, at around 23:30. We were tired, hungry and thirsty.

Gerry and I headed over to our hotel where after a quick cup of tea we crashed into bed.

This post probably makes it seem like all we did was the gorge. And, of course, that isn’t true. We did all the usual touristy things too.

We did a coach trip to Knossos and the associated museum in Heraklion. 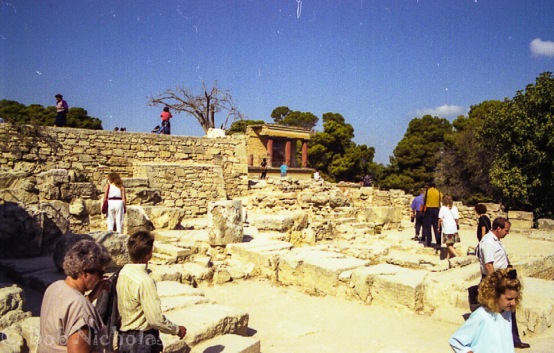 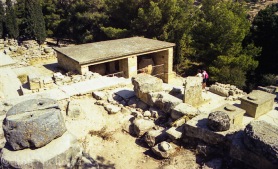 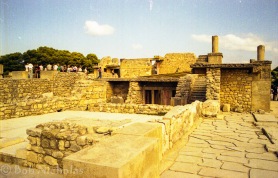 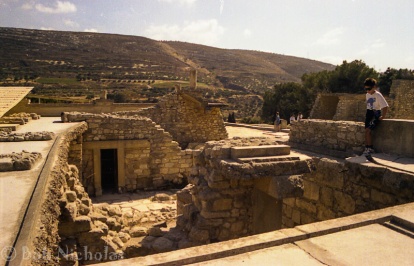 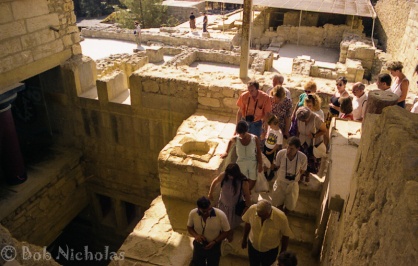 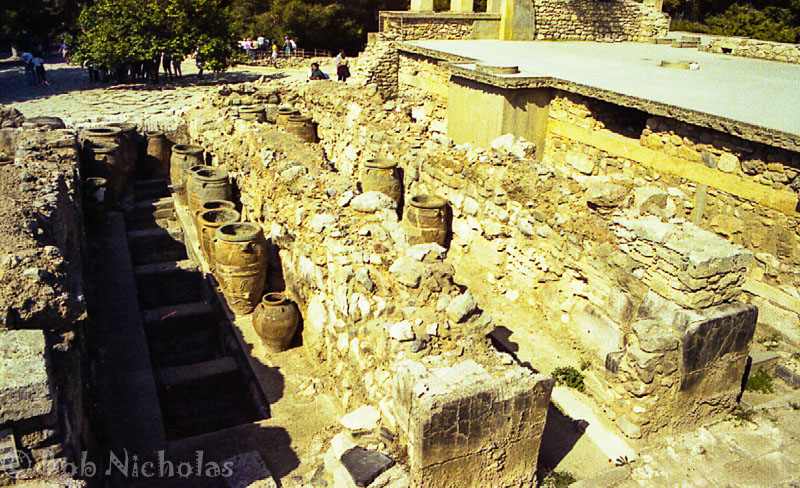 We did a boat trip from Agios Nikolaos to Spinalonga. 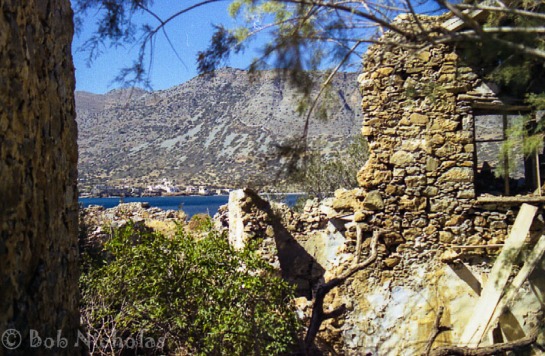 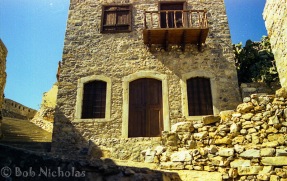 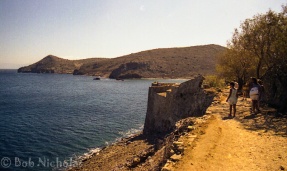 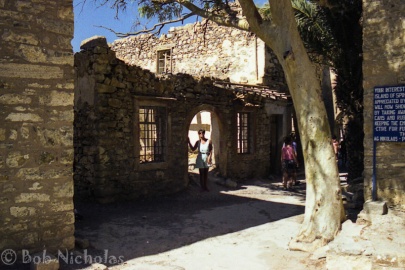 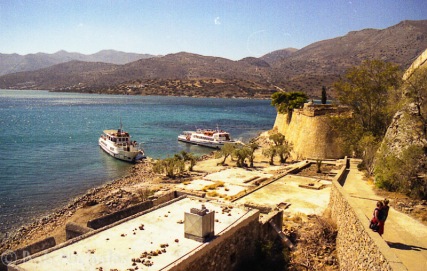 We hired a car, visited Vai beach which features the largest natural palm forest in Europe. Is called the “Bounty Beach” as it is said that this is where the famous Bounty bar adverts were filmed. Needless to say it was quite disappointing, commercialised and crowded. There are counter claims as to where the filming actually took place.

While we had the car we also toured the Lasithi Plateau, a trip which gave spectacular views out over the island and, as I recall, gave us the cheapest meal of the holiday. A greek salad, a bowl of some kind of meat stew and a beer. All in for around £5 for two. 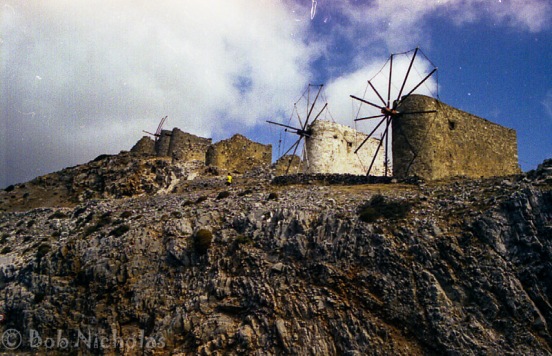 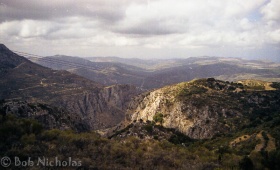 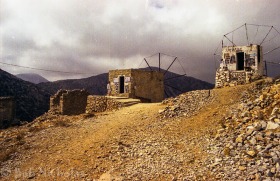 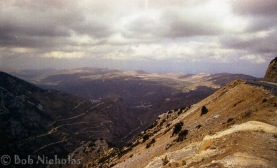 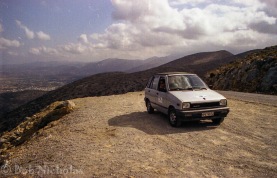 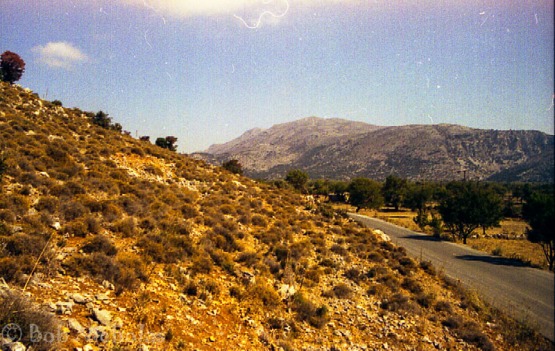 Sorry about the photo quality. I can’t remember what camera I had at the time. Certainly it was pre-digital and may even have been in my pre-SLR days.

2 thoughts on “Samaria Gorge & Other Stuff”